This summer, my husband took our daughter on a three-week adventure to Europe.  Before they left, I gave my daughter a bon voyage card that said:

Travel is the only thing you buy that makes you richer.

Okay.  I didn’t come up with that, but I did add my own line:

Well, that and books.

I read four books while my family was gone.  In a row.  Without taking a break between them. While my peeps were trying new cuisines, I was eating supper and reading at the same time.  If you’re a bookworm, you know this is Michelin Star territory.

And so, not to keep the joy to myself, I thought I would share my reviews while the books are fresh in my mind.

First up:  Americanah by Chimamanda Ngozi Adichie:  4 out of 5 stars

I had seen a clip of Adichie speaking and moved her straight to the top of the list of authors I want to read.  (Check out her TED talk!) She is from Nigeria, so part of the attraction could be her amazing accent, but I also liked her nuanced description of her childhood and I wanted to get her perspective on the journey from Nigeria to the West and back again.

It was a good choice. I was spell bound by the characters most of the time and I felt they were sitting right beside me talking as I read. I was transported to their experiences in that magical way a good book can do. I identified with many of their experiences and felt what they were feeling acutely. I didn’t want the book to end. All these things are marks of a great book, a keeper if I’d bought it in paper form . … or maybe even a book that would make me go out and buy my own hard copy.

Still …. there were things that kept the book from quite reaching that level for me personally. I glanced at a few other reviews and found one that nailed it: “this book is a beautiful mess….at times indulgent.” There were sections I skimmed because it felt as if the editor had stepped away from the desk and the wind had blown the pages forward. Other aspects of editing seemed odd, too–the excerpts from the blogs weren’t as artfully integrated as they could have been, for example. At times, sections of the book felt too episodic–and I have a high tolerance for episodic novels. The main limiting factor for me, though, was an occasional but recurring shallowness on the part of the main characters in terms of how they felt about the other characters in the book. It was too easy for them to be quite flakey about dropping a character who had been immensely important just a couple pages ago. For example, Ifemelu joined a family as a nanny–some intense scenes are shown with the little girl and then–poof–the family disappears with no wondering about what happened to the troubled child or anything. Ifemelu’s parents are also not followed consistently, especially after she returns to Nigeria. The ending is much too rushed and uncomplicated, given the circumstances. In the end I did not feel I connected as much with these rather casual characters as I was hoping I would given their beginnings. In the end, I was surprised to feel they had a little more of Tom and Daisy in them than I thought….which could be kind of interesting actually if it had been played a little differently.

Having said all that, I definitely recommend the book. It opens the doors wide and invites the reader in. The ongoing thread holds true. It is a wonderful glimpse into a world I’d otherwise never know. It kept me turning the pages and I was sad when it ended.

Second in Line: The Weight of Ink by Rachel Kadish:  3 ½ out of 5 stars

After Americanah, I wanted to dive into an entirely different world, and London’s Jewish community—past and present– seemed to offer a nice counterbalance to modern Nigeria.  The Weight of Ink is historical mystery, kind of a less sensational relative of The DaVinci Code, that spans centuries and continents.

The book offered multiple levels of enticement for me as a reader: it juxtaposed vastly different cultures including the modern UK, post WWII Israel, the Shakespearean and post Shakespearean theatre worlds, the London Jewish communities transplanted from Spain and Amsterdam, the free thinkers’ circles of the post Elizabethan era, and more.  On paper, it looked like a perfect match.  Plus it got fabulous early reviews. I couldn’t wait to dive in.

That’s why it came as a total shock when it took me almost half of the book to really feel a connection with the characters, especially the modern-day characters.  I found their motivations difficult to follow and they never became fully alive.

Fortunately, the primary historical character was stronger and, as the book progressed, the plot interaction between present and past dove-tailed in a satisfying way.  Moreover, the historical world itself felt vividly alive.

The mystery aspect was well crafted and I did stay up late one night seeing how it would play out.  I also loved the central theme of the book.  In the end I had grown fond of the characters.  All in all, it was a worthwhile read for me and I’m glad I stuck with it.

Major quibble:  I did not buy the last historical twist AT ALL, which you could see coming from a mile away.  If you read the book, let me know if it worked for you.

Third: Big Little Lies by Liane Moriarty: 5 out of 5 stars

This spring, my husband and I watched the Big Little Lies HBO series, which is set in California, so I wanted to see how that would compare to the Australian book.  Moriarty has a reputation for writing extremely popular mass marketed books that could even be called chick lit.  This gave me pause, but I decided to go for it and I’m glad I did.

I had several angles to consider as I read the book.  For starters, it’s always fun to consider why a screen version makes changes to the original text.  I also had some specific questions about a few quirks in the TV version and wanted to see if they originated in the book or were Hollywood embellishment.  Finally, I was excited to continue my travel through books theme with a visit to Australia.

Drum roll, please … I declare the book version better!  (As if there were any other possibility.) Here are the particulars.

For starters, the book’s characters were more relatable than the screen version.  Maddy, for example, had more dimensions and came across as the type of real, complex person I might be friends with–a basically good person struggling to do the right thing.  My personal opinion is that having her television version casually betray her husband was a terrible decision.  It changed the very core of her being, making her less interesting, not more, and felt like a sensationalistic, cheap way to pile on the drama.  In general, I found the sensationalizing of the characters and plot did not work in the television version (which is overall very good) and took away from the heart of the story.

I felt validated that the things that struck me as out of character on HBO were not in the book at all.  The teacher is not a totally incompetent ninny, for example, and I’m still trying to figure out why anyone thought giving Jane a gun obsession or having her attack Renata could possibly be a good idea.  Ed does not inexplicably turn into a jealous jerk, and Abigail is not a spoiled brat.

One exception to my preference for the book was how the actual climax played out.  I did like the solidarity of the women on screen.  I felt that the book diluted this somewhat by having more people involved and adding a last-minute back-story for Bonnie. I also felt the character of Renata had much more texture and development in the television version.

I liked both versions of the story, but I loved the book. 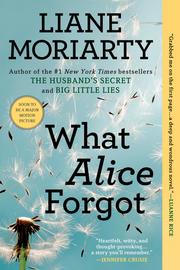 Finally, What Alice Forgot, also by Liane Moriarty: 4 out of 5 stars

I devoured Big, Little Lies quickly, so I wanted another Moriarty book for the last segment of my read-cation.

What Alice Forgot is openly gimmicky.  The protagonist suffers a concussion during spin class and wakes up without memory of the last ten years.  In her mind, she has gone back to the time when she adored her husband, was giddy about being pregnant with her first child and had amazing plans to renovate their ramshackle historical home.  In real life, she and her husband are in the middle of a divorce, she is a helicopter mom of three and lives in a palatial home from which she directs various PTO-type projects.

Despite the gimmick and the strong chick-lit vibe, I found What Alice Forgot to be an intriguing novel.  I am always fascinated by the examination of memory, for starters, and I liked how the book did not rely on the classic total amnesia pattern.  Instead it chose a fairly believable gap of ten years that quickly began to fill in.  I liked how various experiences caused bits of memory to fall into place and how false memories occasionally showed up. I thought Moriarty did an incredible job of tight-walking the line between a more innocent past self and a more cynical yet substantial present self.

In my own mind, I revisited the premise of the book often.  What would it be like to re-live the past ten years in the span of one week? I’m not sure I even know how to approach that idea.

BIG ISSUE: I would have given this book five stars but for the ending/epilogue:  I’m not a fan.  That is cheating.

Both of the Moriarty books provided a nice comparison of Australian and American culture.  What is interesting about the differences is the almost complete lack of any difference at all.  I have to conclude that if these books are true to life, I could plop down on the other side of Earth and fit right in (except for the driving on the wrong side of the road part).  That in itself is interesting.  How could two groups of British colonists on opposite sides of the globe end up the same except for what they call the surface of the workspace in the kitchen? Inquiring minds want to know.

I’ll let other readers ponder such questions.  In the meantime, I may push another Moriarty book–The Husband’s Secret–to the top of my list for my next reading opportunity.