A Day on the Swamp Rabbit

Earlier this year I did a story for our local paper about The Swamp Rabbit, a rails-to-trails project in Upstate South Carolina.  The original railroad was a short line used for various industrial purposes in the former mill town of Greenville, but after decades of abandonment followed by seven years of activism and community building, it was transformed into a jewel of a greenway for walkers, bikers, runners and more.

My newspaper story focused on the history and economic impact of the trail, but as preparation for writing, my two traveling companions and I spent a beautiful spring Saturday exploring it for ourselves.  Even though it has nothing to do with buttons or writing per se, the experience was so positive and hopeful, I thought I’d share the story of our day here on my blog.

We began our adventure in a small town at the base of the mountain called Travelers Rest, leaving our car at a park that featured a BMX type obstacle course that our young companion couldn’t possibly pass by without trying.  Then we stopped in Sunrift Adventures for a map, walked our bikes across the lazy but charming Main Street and got on the trail. 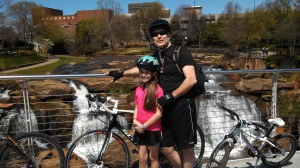 My traveling companions on Liberty Bridge in downtown Greenville

The Travelers Rest portion of the Swamp Rabbit goes by a succession of patios belonging to various eateries, all releasing delicious smells that made us regret our plan to get some miles underway before stopping for a late lunch. But we persevered and soon came to our first diversion—an exercise park with equipment that let you do things like spin and balance, pull up, and rock and roll.  We soon learned that cool little highlights dotted the whole trail—funky benches, murals, patches of blue and silver pinwheels spinning in the breeze, historic railroad cars, a WW II plane, a meditation spot, a teaching garden, and a tool station with wrenches and a pump for working on bikes.

At times the trail—which had very gentle elevation changes–went through forest and swampland, including a nice cut through the rock from the original railroad bed.  At other times it went past current industrial or post-industrial areas that were interesting because they aren’t the part of Greenville I usually see.

Periodically we passed businesses catering to people on the trail—bike shops including a custom bike manufacturing mini-factory, gyms, outfitters.  There were even signs for a new housing development for people who wanted to live close to the trail.

The Reedy River ran all along the trail—at times closer and more present than others.  We saw ducks in the river, but never saw a rabbit!

Because I knew very little about the trail before riding it, I was surprised to suddenly find myself at Furman University. The campus had a festive atmosphere thanks to a women’s baseball game, so we stopped for a bit to soak up some positive energy, enjoy the view of the lake and take a bathroom break.

In a way, the huge variety of people on the trail was the most impressive aspect—serious cyclists and runners, teenagers skating, families walking and biking, several languages.  There were large people and lean people, old-timey looking people and lots of people getting their lycra on . . .  somehow they all merged together just fine. 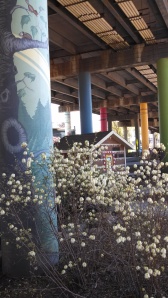 As we crossed into Greenville city limits, the flavor became more urban and less pastoral.  A rubberbased running path took up part of the trail.  Our young companion was thrilled when we passed under a bridge just as a long train went by.  Schools, churches, sports fields, shiny repurposed factories and eventually the new cityscape of downtown Greenville came in quick succession.

Of particular note was Linky Stone Park, which featured a creative use of the space under a busy bridge—fairy tale murals and flowers, Peter Rabbit’s garden, musical toys, picnic tables, wind chimes.

Enjoying crepes at a French cafe along the trail….what more can you ask for?

From there it was a short distance to the jewel of downtown Greenville—Falls Park.  Somehow, even though I grew up within half an hour, I’d let many years go by since I’d been here, so I was blown away by what we discovered–a lovely urban green space around the Reedy River, beautifully combining historic conservation and new construction.  The centerpiece of it all was The Liberty Bridge, a sweeping and elegant pedestrian pathway crossing the river right in front of the falls.  Terraced gardens provided lovely spots for hundreds of people to enjoy the perfect spring day.  Walking up the brick steps toward Main Street we found a surprisingly diverse selection of restaurants and picked an open air French café named Papperelles where we had crepes and frites and other amazing delicacies.  The sun was shining, musicians were playing . . . . and as we left Falls Park, we discovered a  gigantic root system of a tree growing along the embankment that truly made us feel as if we’d stumbled into a fairy tale. 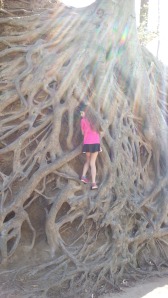 The final leg of our day took us from Falls Park to the Greenville Zoo, which was positively humming with kid energy and shaved ice.  We explored the awesome playground, rested for a bit, then started the return ride.  We made a snack stop halfway at The Swamp Rabbit Café, which offers local produce as well as yummy snacks.  It was also a good place for our strongest biker to ride ahead and get the car.  We’d ridden over twelve miles at that point and the slight uphill grade going to Travelers Rest was starting to become noticeable.  My young companion and I made it to the tool station stop, where we waited for our ride.  Our last impression of the trail was a friendly policeman on a motorcycle waving as he rode by.

If you’re in the Carolinas, Tennessee or Georgia this summer, you may want to check out the trail yourself.  More information is on the Swamp Rabbit Website.  And if you want to learn more about how this wonderful renaissance came to be, please see my article in the Hendersonville Times-News.

I am an author living in the Blue Ridge Mountains. My first book, The Button Collector, was released May 6, 2013, by PageSpring Publishing.
View all posts by Elizabeth Jennings →
This entry was posted in Uncategorized and tagged bicycle, biking, greenville, greenway, libery bridge, rails to trails, running, south carolina, swamp rabbit, trail, travelers rest, walking. Bookmark the permalink.